A new image of the members of SCARZ EU, Apex Legends team! 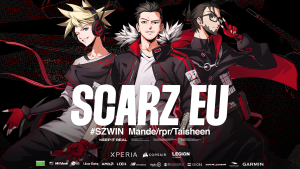 At rpr’s request, these characters were created by Yuma, the creator of the new visuals for Pastel Sour from “VTuber Saikyo Kessen SEASON3 Ver APEX LEGENDS”!

The visual design is based on the players’ feedback, and the costumes are based on SCARZ’s colors, red and black.

Also, based on the already-characterized rpr, the god of death, REAPER, we incorporated the following interpretation of Greek mythology into the costumes, showing the three of them as close as brothers.

Please look forward to more character development in the future!

The official characters are now complete, but we hope that fans will continue to express their own images of the characters in their own styles too.

Thank you for your continued support and encouragement.